Washington, D.C. — As the holiday season spotlights acts of kindness and giving back, a new federal study shows that 1 in 4 Americans volunteered through an organization and two-thirds helped their neighbors last year.

The annual Volunteering and Civic Life in America research, released today by the Corporation for National and Community Service (CNCS) and the National Conference on Citizenship (NCoC), shows that service to others continues to be a priority for millions of Americans.

“We are calling on Americans to volunteer in their communities, and to invite their friends and families to join them,” said Wendy Spencer, CEO of the Corporation for National and Community Service. “Volunteers enrich our communities and keep our nation strong. Service also connects us with our neighbors and provides a chance to use our skills for the common good. There are so many ways we can make a difference for those in need, during the holiday season and throughout the entire year.”

This year’s report found that 62.6 million adults (25.4 percent) volunteered through an organization in 2013. Altogether, Americans volunteered nearly 7.7 billion hours last year. The estimated value of this volunteer service is nearly $173 billion, based on the Independent Sector’s estimate of the average value of a volunteer hour.

In addition, more than 138 million Americans (62.5 percent) also engaged in informal volunteering in their communities, helping neighbors with such tasks as watching each other’s children, helping with shopping, or house sitting. Other civic health indicators from the report found that two-thirds (68.5 percent) of Americans have dinner with their family virtually every day, while three in four (75.7 percent) see or hear from friends and family at least a few times a week, and more than a third (36.3 percent) are involved in a school, civic, recreational, religious, or other organization.

“The civic health of our country is strong when people trust and help their neighbors and engage with their government,” said Ilir Zherka, Executive Director of the National Conference on Citizenship. “Civic engagement is essential to the life our country. That’s why all sectors of society from non-profits, to businesses, to our government must redouble their efforts to promote greater connections among Americans.”

The research shows that overall rate of volunteering is slightly lower than the previous year yet remains strong and stable, and that Americans’ commitment to volunteering spans across generations. Key demographic highlights of the report include:

“Every day, volunteers of all ages are giving their time and talents to solve problems and make our nation stronger,” Spencer said. “Whether tutoring students or connecting veterans to services or responding to natural disasters, Americans are doing extraordinary things to improve lives and strengthen communities. As they serve others, volunteers help themselves by learning new skills, increasing job prospects, and even improving their health.”

Last year, CNCS released Volunteering as a Pathway to Employment, research which found that unemployed individuals who volunteer over the next year have 27 percent higher odds of being employed at the end of the year than non-volunteers. Among rural volunteers and volunteers without a high school diploma, the likelihood increases by 55 and 51 percent, respectively.

Volunteers provide critical support to our nation’s nonprofit, civic, and faith-based organizations, offering time, skills, and monetary support. The Volunteering and Civic Life in America research found that volunteers are almost twice as likely to donate to charity as non-volunteers. Nearly eight in 10 (79.2 percent) volunteers donated to charity, compared to four in 10 (40.4 percent) of non-volunteers. Overall, half of all citizens (50.7 percent) donated at least $25 to charity in 2013.

As the federal agency for service and volunteering, CNCS funds the annual Volunteering Supplement to provide government and nonprofit leaders with in-depth information on volunteering and civic trends to help them develop strategies to mobilize more Americans to address local needs through service. The Volunteering and Civic Life in America data includes profiles for all 50 states, 51 large cities, and 75 mid-sized cities, including data on volunteer rates, civic indicators, rankings, area-specific trends, and analysis.

The research is part of the agency’s efforts to expand the impact of America’s volunteers on key challenges facing the nation. CNCS provides critical support to America’s nonprofit and voluntary sector through grants, training, research, and partnerships. Last year, CNCS engaged more than five million Americans in service through AmeriCorps, Senior Corps, National Days of Service, and other programs.

The full analysis and customizable data sets can be found at volunteeringinamerica.gov. Americans interested in finding local volunteer opportunities can visit www.serve.gov.

The Corporation for National and Community Service is a federal agency that engages more than five million Americans in service through its AmeriCorps, Senior Corps, Social Innovation Fund, and Volunteer Generation Fund programs, and leads the President’s national call to service initiative, United We Serve. For more information, visit NationalService.gov.

The National Conference on Citizenship (NCoC) is a congressionally chartered organization dedicated to strengthening civic life in America. We pursue our mission through a cutting-edge civic health initiative, an innovative national service project, and cross-sector conferences. At the core of our efforts is the belief that every person has the ability to help their community and country thrive. To learn more, visit NCoC.net.

Background on the Report
The data for this report were collected through two supplements to the Current Population Survey (CPS): the Volunteer Supplement and the Civic Engagement Supplement. The CPS is a monthly survey of about 60,000 households (approximately 100,000 adults), conducted by the U.S. Census Bureau on behalf of the Bureau of Labor Statistics. The selected supplements collect data on the volunteering, voting, and civic activities of adults age 16 and older for volunteering and 18 and older for the civic supplement. Volunteers are considered individuals who performed unpaid volunteer activities through or for an organization at any point during the 12-month period (from September 1st of the prior year through the survey week in September of the survey year).

AmeriCorps member Liam Poitra has collected the blueprint of almost every house he’s helped build. After years of building houses, 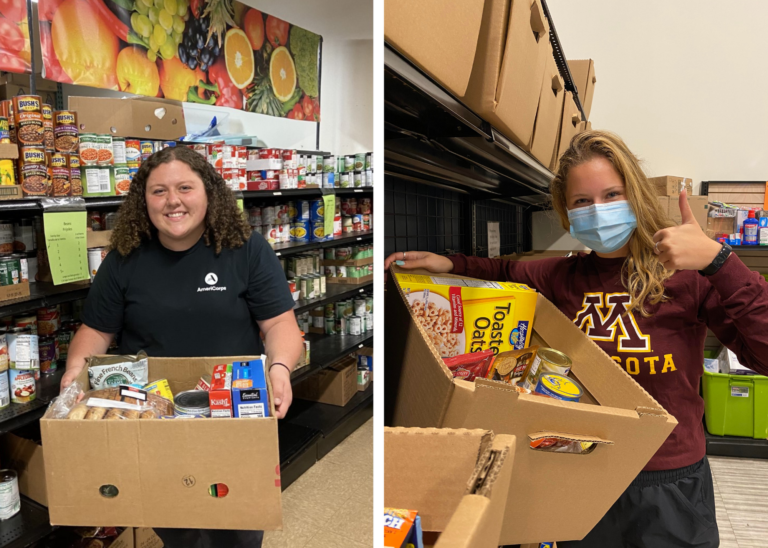 What was it like to serve at food shelves during the height of the pandemic?

Most days last summer, Emergency Response Initiative AmeriCorps member Mikayla Reinhardt was on the move, making food deliveries from her

“You’re not just one person”: Serving at Second Harvest Heartland​ One thing Anna Lahr learned when she was captain of