“Service led directly to a career I love”

Vanessa chose to become an AmeriCorps member as she pondered her options after graduating from college in 2010. Her service has launched her into a decade-long career that she loves in employment services.

How did you become an AmeriCorps member, and where did you serve?

I majored in International Studies and Japanese at the University of Iowa, and I knew that neither of those things was going to take me very far unless I really committed to more study. As I was wondering about my next step after graduation, I saw a couple of AmeriCorps opportunities pop up online and read up on them.

It was important to me to do something meaningful to connect with people and help my community, and AmeriCorps resonated with those things I valued. I applied to two programs, one in Chicago and one in the Twin Cities. I chose the Twin Cities program and moved here from Iowa.

I served at CommonBond Communities in St. Paul. As an employment services coach, I helped residents of our affordable housing communities with whatever they needed that related to their income or finances — creating résumés, connecting with tools for budgeting or building credit, making sure they had the tools to be successful in the job search.

Did your college studies end up helping you in that position?

I hadn’t studied workforce development, but my studies actually did help — not because I was speaking Japanese at work, but because I had studied abroad and was part of global and domestic diversity programs at school. That informed my approach to serving job seekers from a variety of backgrounds. Also, I was an English minor, so I liked proofreading and working with people on the rules of writing!

The AmeriCorps program I was in came to an end after my first year, but I got very lucky because the following year was the pilot of another, similar program focused on economic stability. That was incredible serendipity: I got to return to CommonBond Communities in the same role, continuing my relationships with the staff and residents.

And then, more serendipity: When I was getting to the end of that second service year and looking at the job market, my supervisor went on maternity leave and I was asked to fill in for her as a temp. After that, another person in the same role was leaving, and I ended up getting that position.

I stayed at CommonBond for nearly a decade and was able to learn a number of different things, from database administration to running youth programs to figuring out how to improve the ways we worked with people to boost their financial health. I always joked that I was living the AmeriCorps dream: service that led directly to a career I loved.

This year, I started a new job as a workforce development representative with the Minnesota Department of Employment and Economic Development, or MN DEED. I do a lot of one-on-one work with people looking to become employed, and they’re people at all different stages: folks receiving unemployment, veterans, people at the beginning of their careers or mid-career, people moving toward the sunset of their careers.

It’s the next step along the career path that I started while serving, but now my work is broader. We work with the public and our services are available to anyone, so I’m able to connect with more people.

Was the AmeriCorps education award important to you?

It really was. As part of my job I attended a workshop on financial coaching, and one of the activities was to set a financial goal for my own life. I set a goal for paying off my federal student loans, and the education award took care of $11,000, which was a large chunk.

Were there other perks of serving?

Coming into the Twin Cities as a transplant, I immediately had a social circle of 40 people in the program — a circle of support. During that first year, we served Monday through Thursday; Fridays were “Corps Days,” where we volunteered as a group at local nonprofits. There’s such a robust nonprofit community here that it was great to see all the options and learn about resources for the residents I worked with.

I still think back on one of our activities from that time. We did a ropes course, with one of the challenges being a 30-foot pole that you had to climb to the top of and jump off (wearing a harness, of course!). I wanted to hang back and watch other people do it before trying it myself, but our instructor said, “If you normally volunteer to go first, don’t. And if you normally sit back, come forward and try it.” So I did. I didn’t succeed the first time, but I tried it again later and I did it. I took that with me: There’s always something to be gained from trying things differently and taking the leap.

Do you encourage people you work with in your job to serve with AmeriCorps?

Definitely! I tell people that if they’re at a point where they can swing living on the stipend for a year, the payoff is really high. As a matter of fact, I ended up encouraging a couple of CommonBond residents to take AmeriCorps positions. They both ended up being hired full-time at the organizations where they worked. Especially if you want to move into a nonprofit or service career, it’s a great way to get started and learn a lot.

Interested in serving with the AmeriCorps? Reach out to our recruitment team through our interest form.

Let’s clear up these myths about AmeriCorps 

Wondering what we really mean by “research to practice”? Here’s a deep dive

At ServeMinnesota, we talk a lot about the central role research plays in our work. Research informs every stage of a program’s development, from initial program design through evaluation. 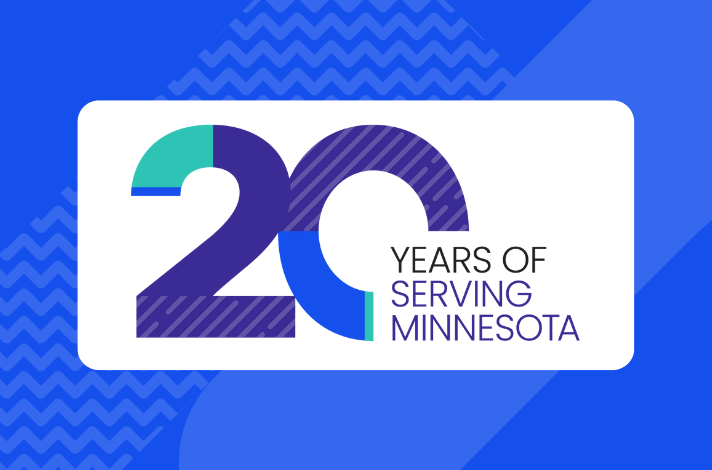 Celebrating 20 years: How ServeMinnesota became a catalyst for positive change in MN

To this day, I am a big admirer of the legislation that created AmeriCorps, the 1993 National Community Service Trust Act.